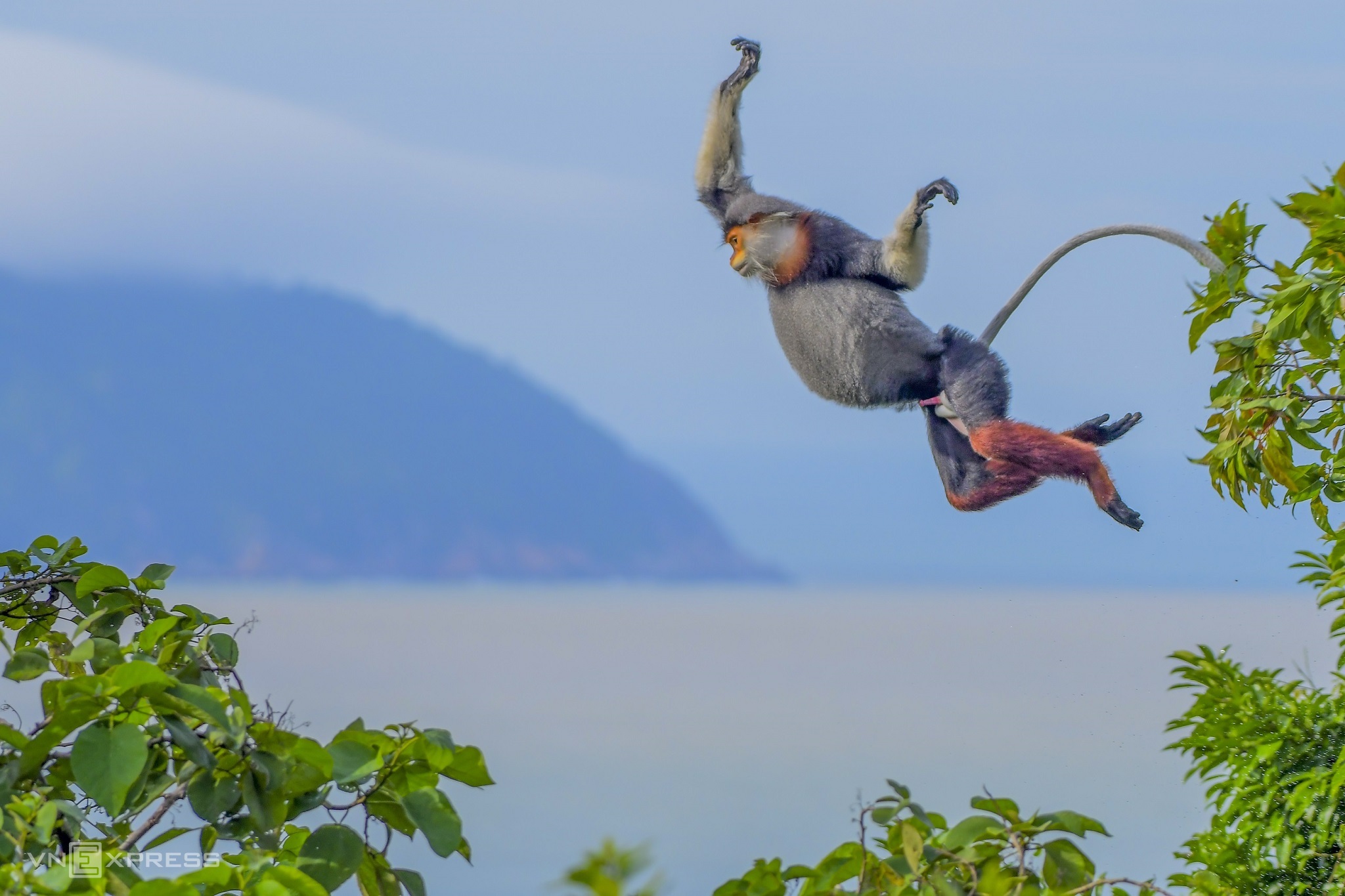 A photo collection by lensman Duong Duc Khanh, who has a strong passion for nature and wild animals, presents the fruits of a labor of love and patience. Khanh spent a lot of time over the last four years waiting… waiting for that right shot of one of the most colorful primates on the planet and of rare birds that transit through the peninsula.

Son Tra has nearly 1,000 species of plants, including 22 rare ones, and hundreds of species of animals, of which the red-shanked douc langur is the rarest with a population of 300-400 that are under strict protection.

The douc langur is known for its ability to spectacular jumps between trees like a circus acrobat, and Khanh gets one in the act. 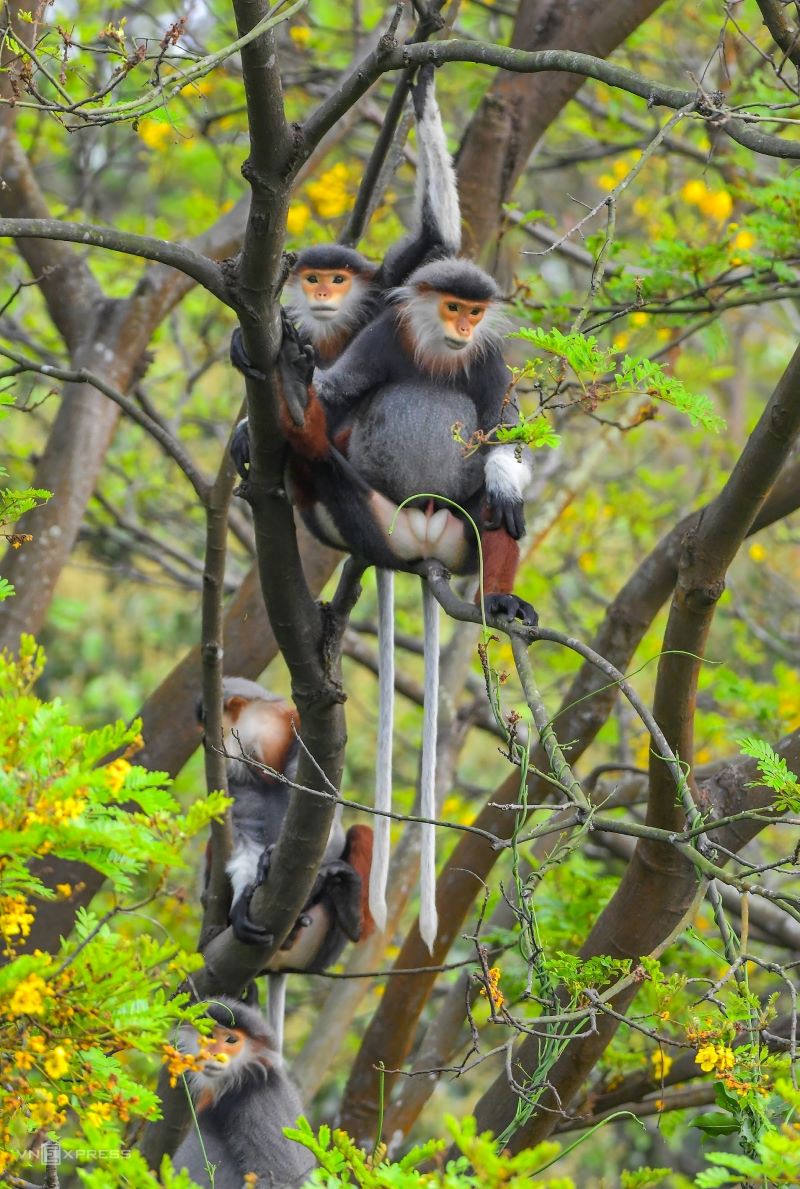 Over the last few years, the peninsula has become known as a place where visitors can enjoy watching and taking beautiful pictures of the langurs.

From Yet Kieu Street, visitors can move along the 2km slope leading to Son Tra for the chance to see a herd of the arboreal and diurnal primates feeding. Those who wish to explore the forest can contact forest rangers in Yet Kieu for guidance. 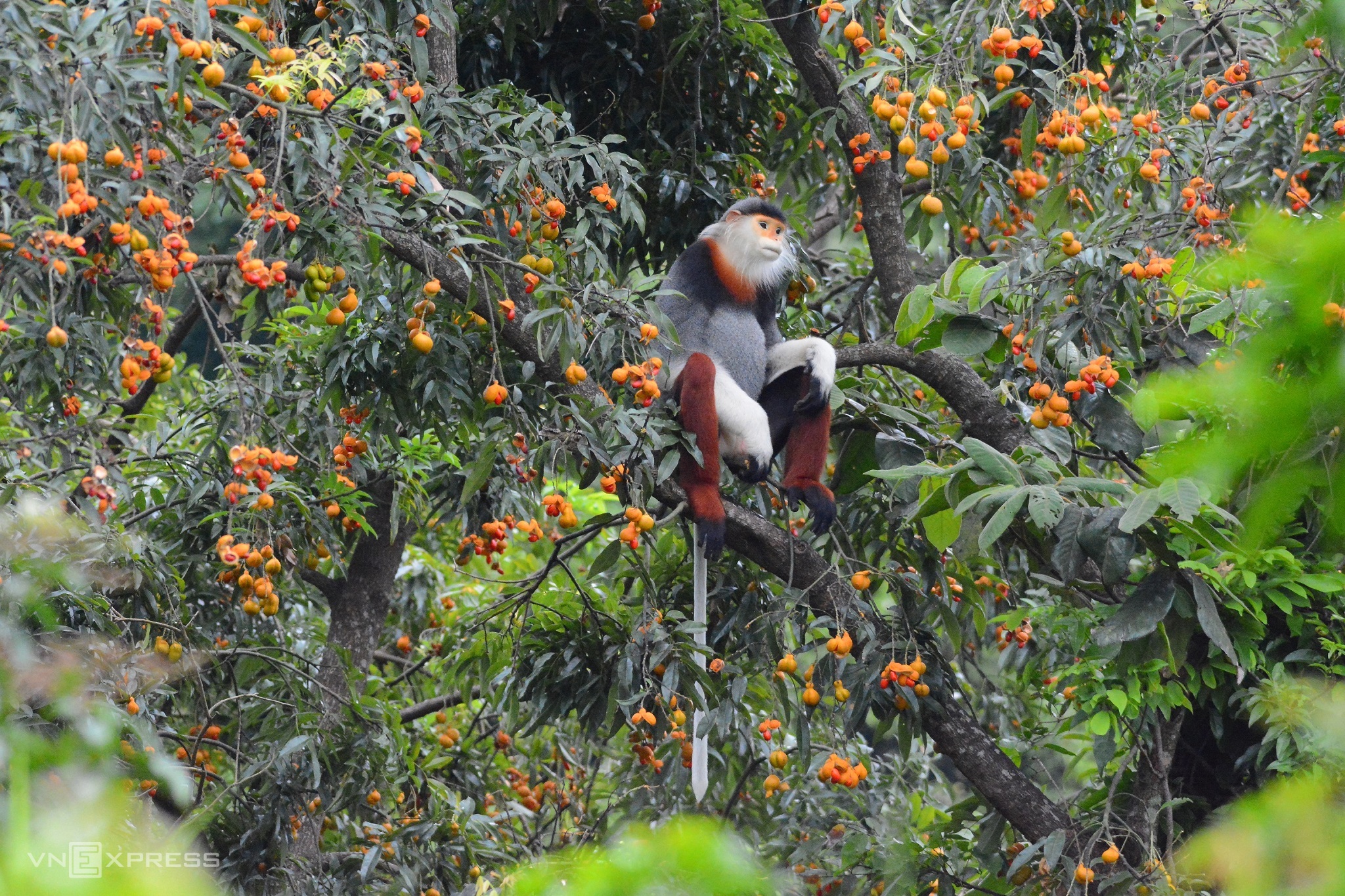 Studies show that the red-shanked douc langur only appears along the Truong Son mountain range, a chain of mountains running along the border of Vietnam and Laos.

The red-shanked douc is a rare and endemic species in Vietnam. The World Wildlife Fund (WWF) has placed the primate on the list of animals in need of unconditional protection. 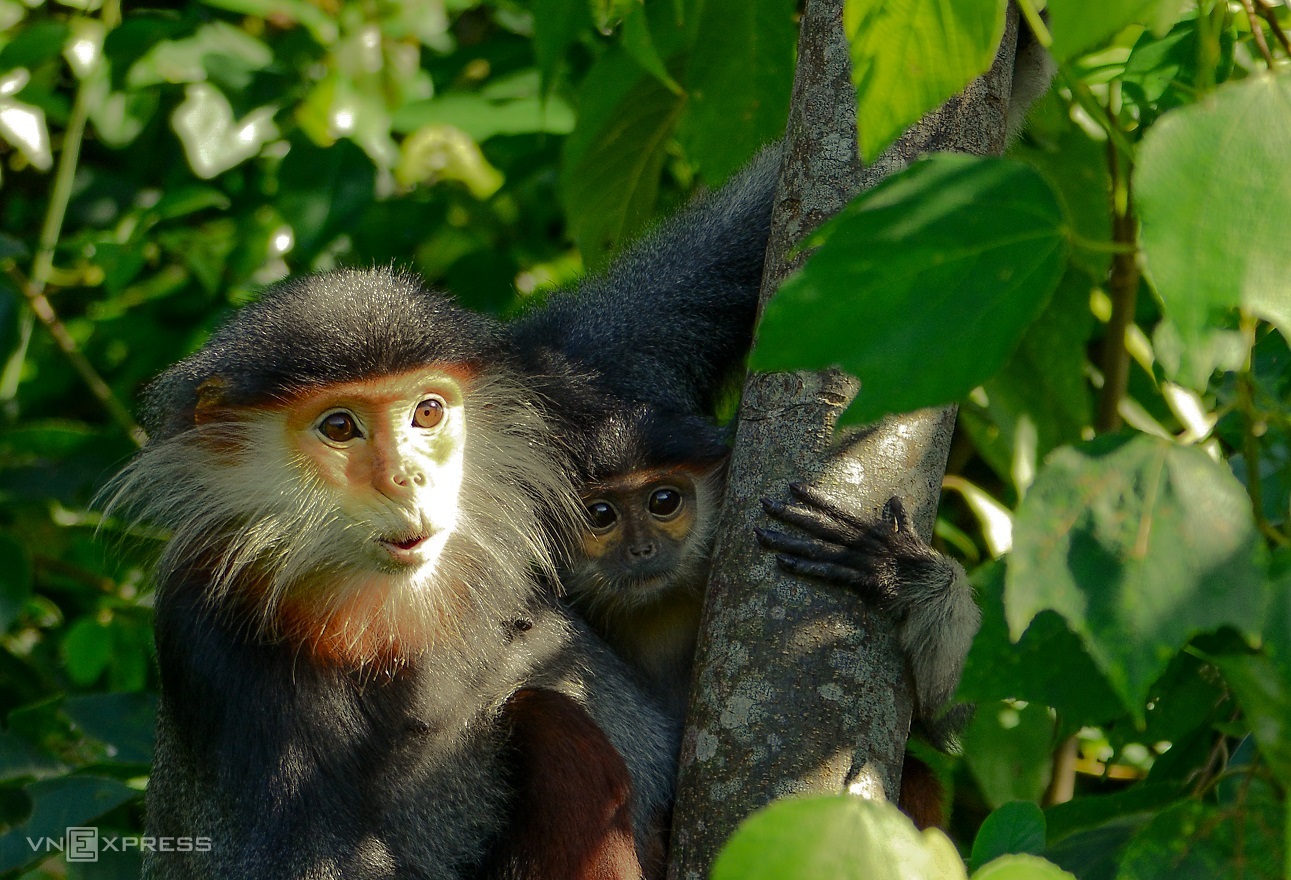 Like other doucs, the red-shanked douc is a long, slender monkey. The male has an average head and body length of 61 cm and the female averages a length of 54.5 cm.

This species is called the “Queen of primates” because of their unique appearance: their forearms are white, upper legs black to gray, the lower legs a deep red and hands and feet are black. 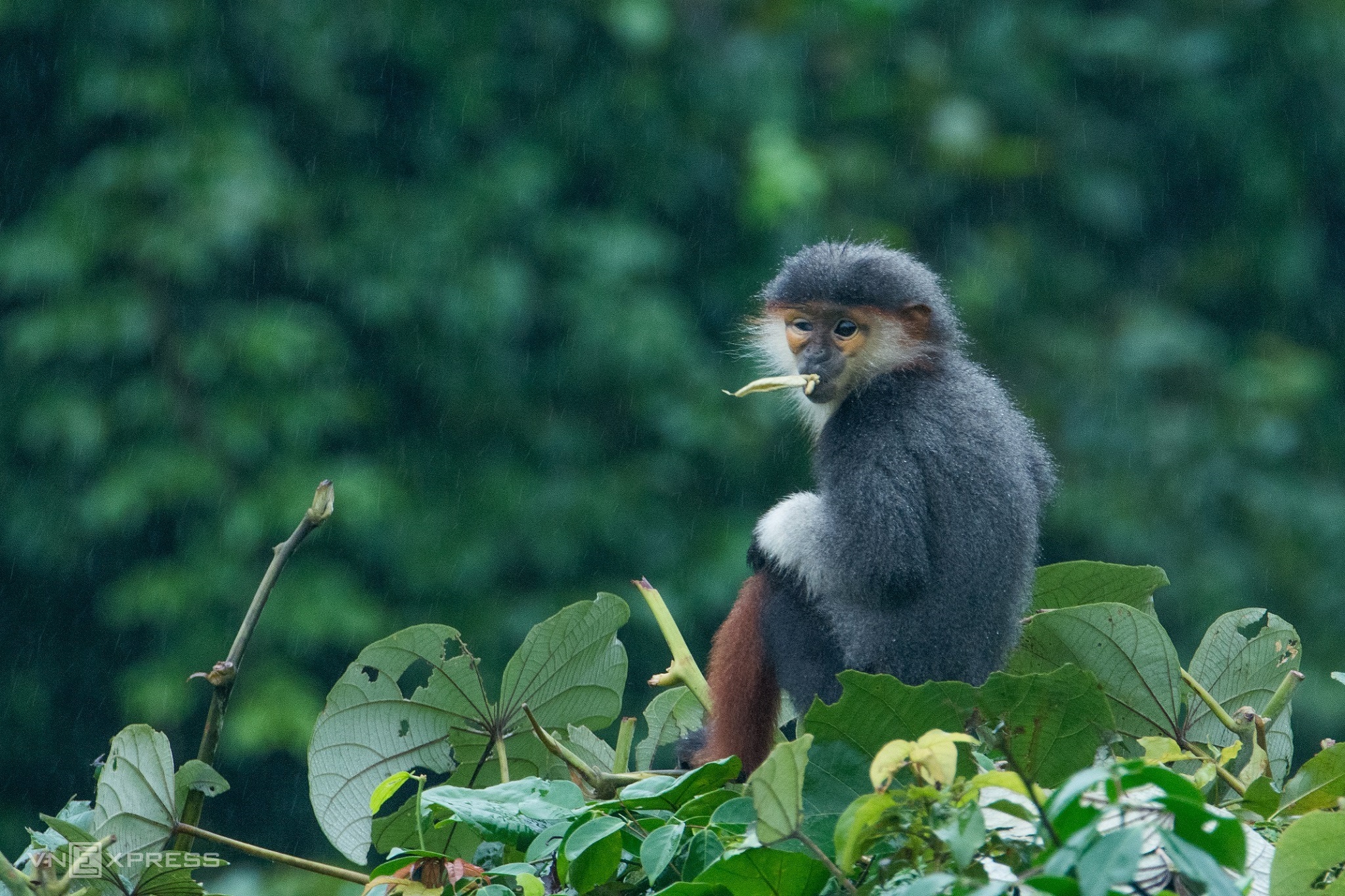 A young langur munches on leaves unconcerned about a sudden drizzle. 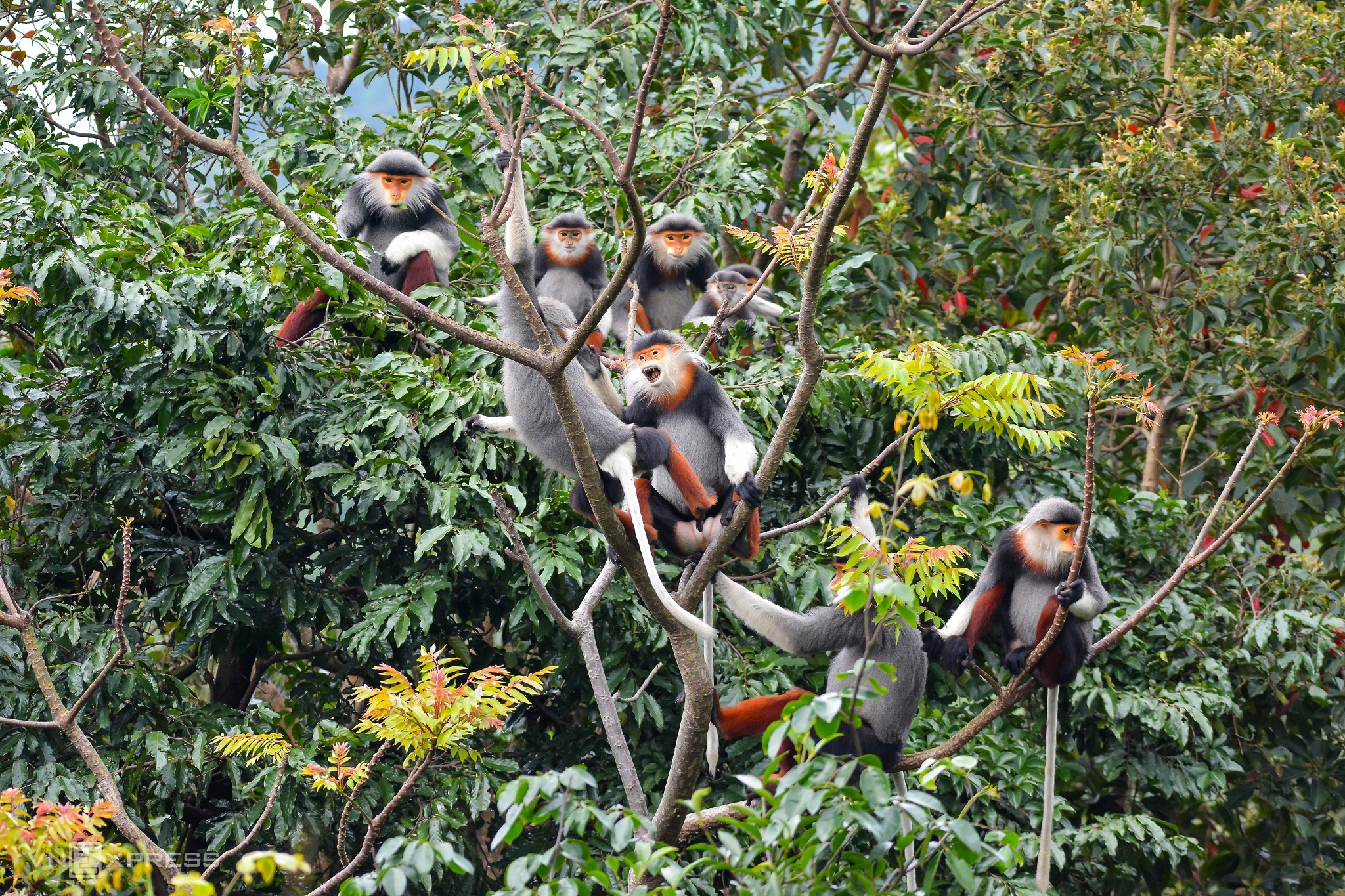 A group of sociable langurs gather on a tree branch. They are under the strict protection of local authorities.

Khanh said early morning and late afternoon were suitable times to take photos of the langurs. 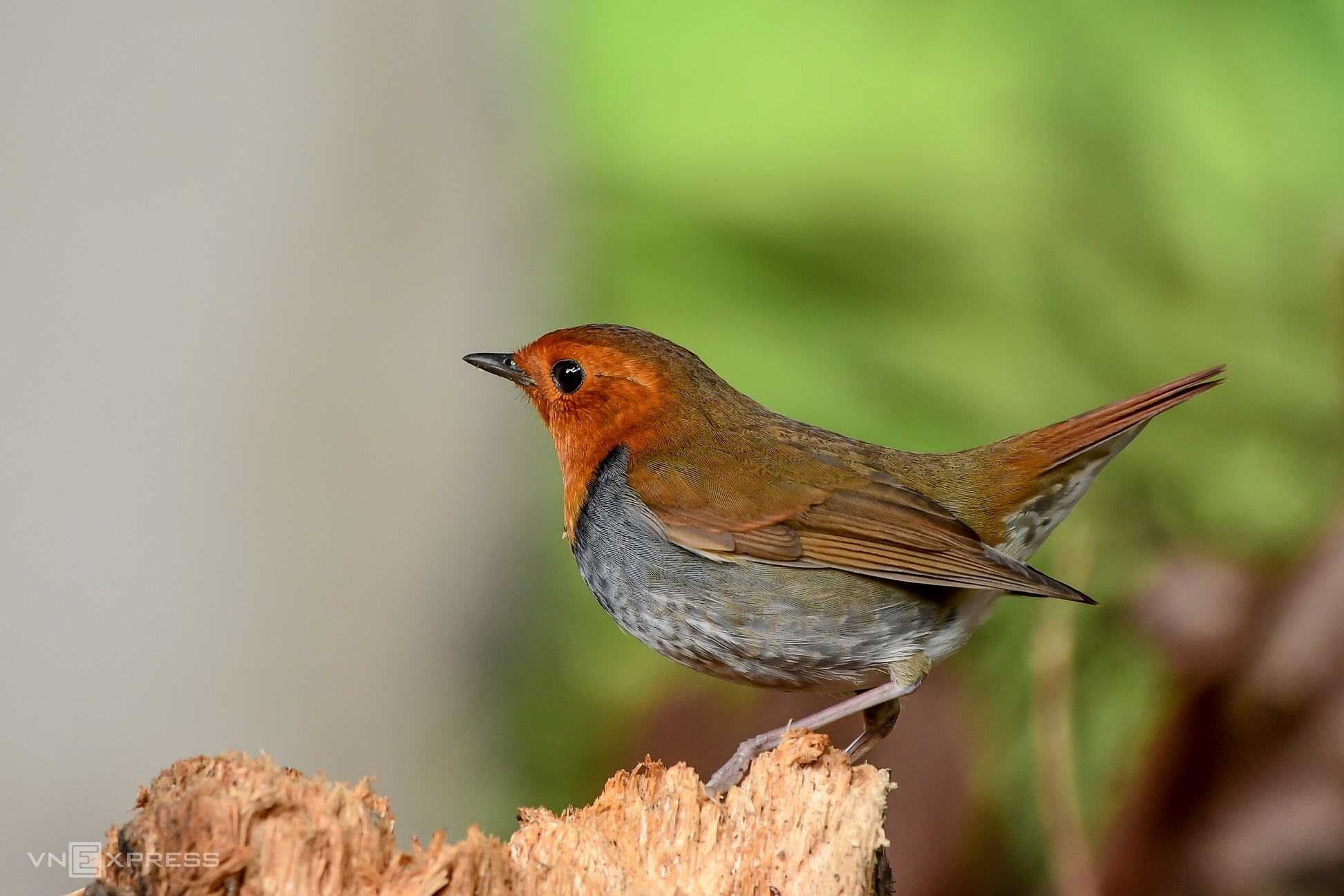 Not many know that the Son Tra peninsula is also known as the “kingdom of migratory birds.” They fly from the north to the south in the last months of the year.

In the picture is a Japanese Robin (Larvivora akahige or Erithacus akahige) seen in December 2019. This migratory bird rarely flies to Da Nang, and this was a rare appearance. 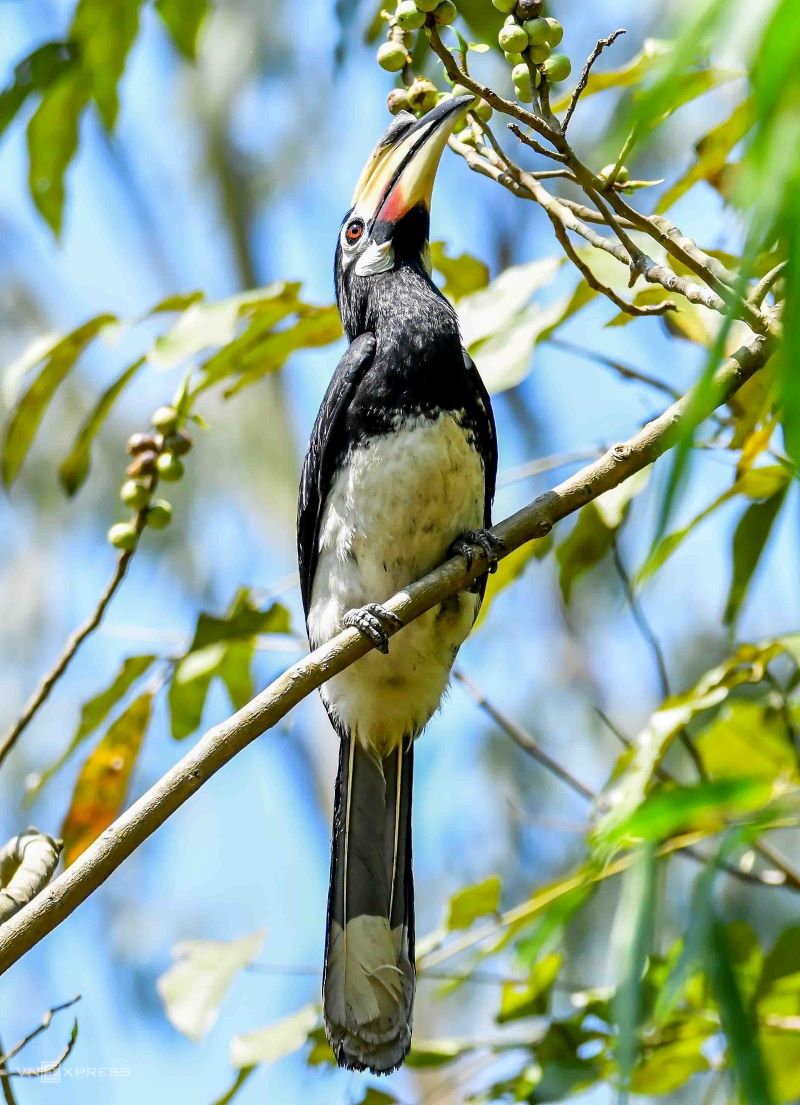 This Oriental pied hornbill (Anthracoceros albirostris) was captured in camera on Son Tra in 2019. This was another rare appearance on the peninsula. 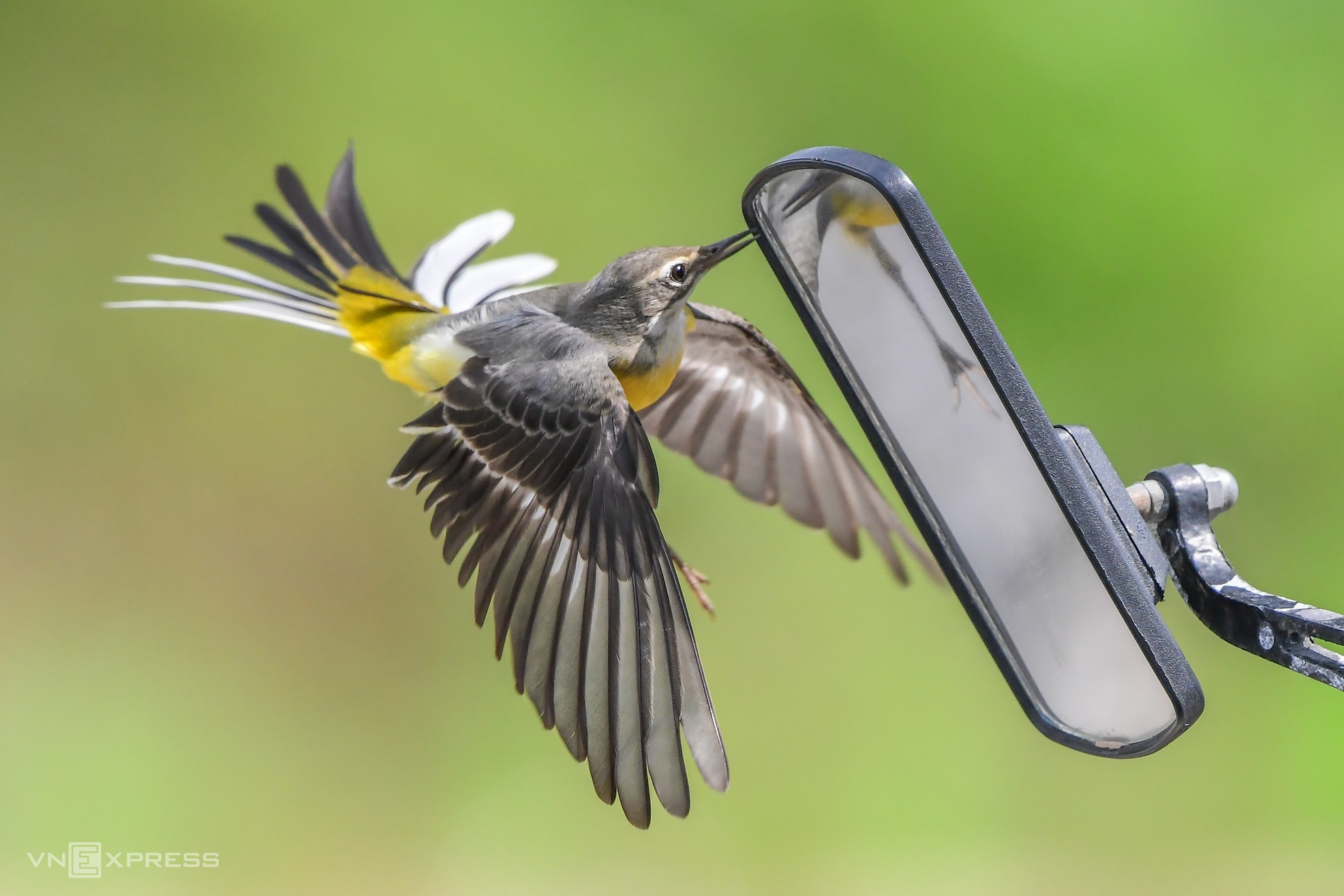 A gray wagtail or Motacilla cinerea pecks at a motorbike’s rear view mirror. A typical gray wagtail measures about 18–19 cm long. It upperparts are gray and the yellow vent contrasts with whitish underparts. 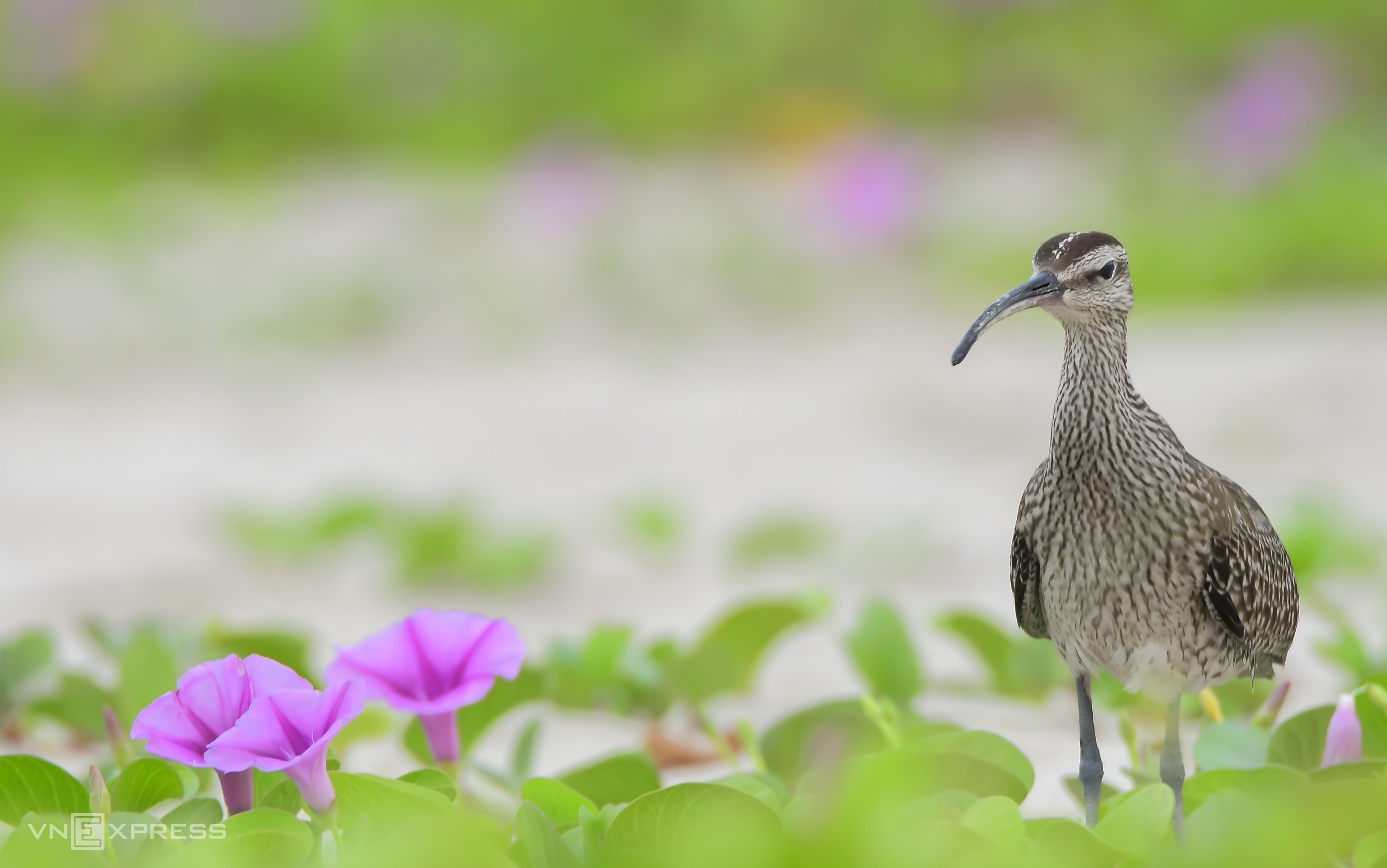 The Eurasian whimbrel or Numenius phaeopus often forages in waters at the foot of Son Tra Peninsula. 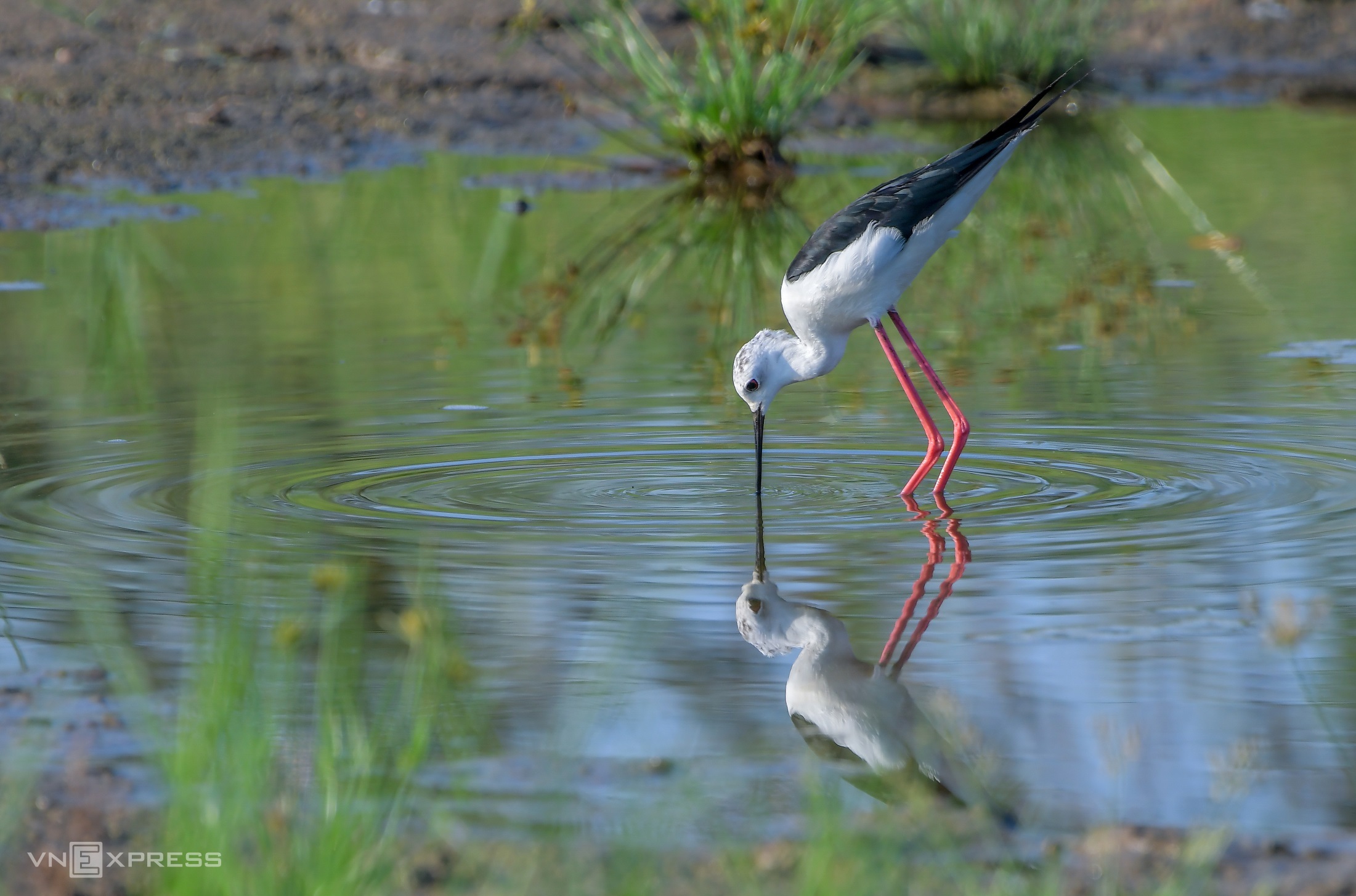 A bird that belongs to the Recurvirostridae family at the foot of Son Tra Peninsula. The species feed on small aquatic animals such as mollusks, brine shrimp and other crustaceans, larval insects, segmented worms, tadpoles, and small fish.